Last week was chock full of monkey business at my summer sewing camp! I’ve wanted to teach the old-fashioned sock monkey project for quite awhile, and this was the summer we made it happen.

Sock monkeys are an Americana tradition, and like many classics, they are making a comeback right now in popularity. When I attended the Street of Affordable Homes Tour, I saw a child’s room that was decorated completely in the sock monkey theme, with bedspread, monkey pictures, and colored sock monkeys everywhere. I was excited to share this craft with my students, in a blend of both the traditional style and current popularity.

For supplies, I bought the original red-heeled Rockford socks from Fox River . That company bought Rockford socks in 1992 and have continued making them, much to the delight of sock monkey enthusiasts everywhere. 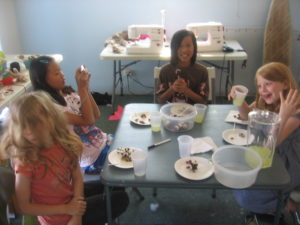 always, my camps have a maximum of four students, which ensures everyone has plenty of personal attention and can thrive in their learning and sewing fun. 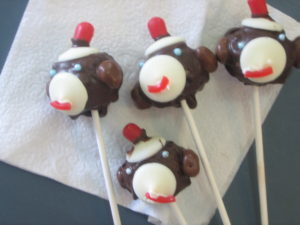 It’s fun to combine treats with such a unique project. I made sock monkey rice krispie treats, sock monkey cake pops, and baby cinnamon rolls that I called monkey ears.

In our camp, we made a big sock monkey and a small one. Because the project requires a lot of hand sewing, I was a little concerned that it would be especially challenging, but everyone did a great job, and had wonderful monkeys to take home.

Traditions are important, and it was a pleasure to introduce my students to a traditional craft with a modern flair.  There are slots open in some of my upcoming workshops, which includes more toys, stuffed animals, clothing, and even a Harry Potter camp. Click here for details and to register!